Van der Knaap's R&D team has developed a sustainable growing system that enables organic growing free from the soil. This bioreactor converts proteins into nitrate nitrogen (NO3--N). The nutrient solution produced by the reactor is stable and free of organic residues, moulds and bacteria.

In the bioreactor, residual proteins and amino acids are converted into nitrate nitrogen (NO3--N) by bacteria. When crops are grown in soil, the soil bacteria convert organic matter into nitrogen that can be absorbed by the plant. However, as this is an uncontrolled process, a nitrogen deficiency or an excess can still occur. The nutrient solution produced by the bioreactor can be delivered to the plants through drip irrigation or other irrigation systems. This gives the grower control over the precise dosage rate and the timing, and effectively makes organic growing a steerable process. 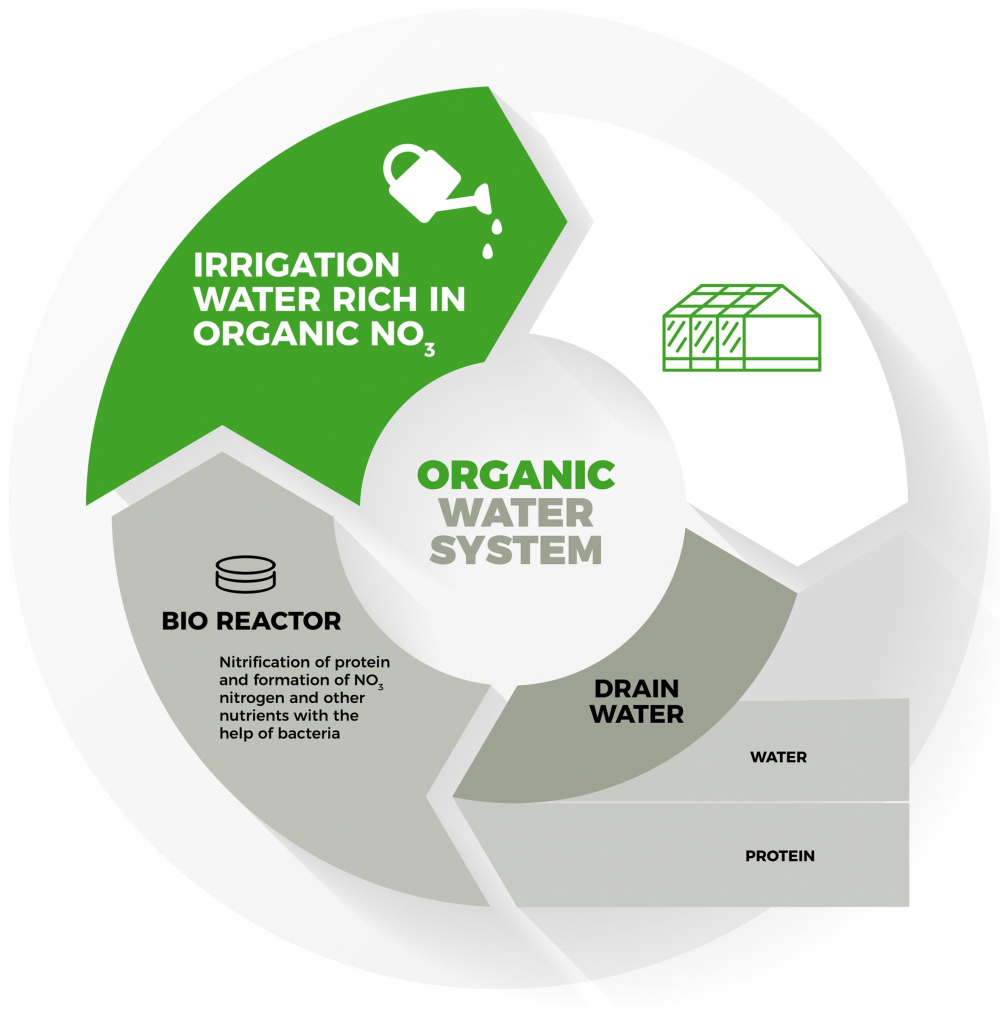 In North America and Canada, the organic nutrient solution system is now being used satisfactorily by several organic vegetable growers. European legislation is different, however. Produce cultivated in this way is not considered organic, despite the huge advantages of growing on substrate. With outdoor cultivation, water and nutrients always leach into the soil as emissions, whereas when cultivation is substrate-based, the input of water and nutrients can be collected and reused. In addition the yields are generally much higher.

The organic nutrient can also be used in current soil-based organic growing systems. The production rates achieved by these growers is often 50- 60% of the yields in substrate cultivation. With our organic nutrients, this could increase to 80- 90%.

Over the past two years, we have grown a variety of vegetables and soft fruit in our innovation centre 'de Kas' using organic nutrients from the bioreactor. These trials compared the results of a crop grown on a mineral nutrient with the same crop grown on an organic nutrient. The organic alternative proved to be a match for the mineral nutrient in all of the trials and in some cases the results were even better and, in all cases, promising!

Research was carried out into the technical results in terms of growth and production, and the trials also examined the differences in various substances and taste. As a rule, a conventional nutrient solution contains six macro and six micronutrients. With organic nutrients, however, the spectrum of micronutrients is much wider. All these micronutrients instigate different processes in the crop, resulting in differences in the levels of vitamins, antioxidants and carotene. In several trials, we examined the nutrients and components of the organically grown produce compared with the non-organic produce. In the case of tomatoes, we noted that the produce grown with organic nutrients contained higher concentrations of substances and tasted better. The organically grown bell peppers had a high vitamin-B content.

Read more about the trials with the organic nutrient solution in our newsletter.