Another successful orchid trial has been completed in Van der Knaap’s innovation centre ‘de Kas’. In this trial, three different substrates for cultivation of Phalaenopsis in 12-cm pots were compared. Fibre-Neth® proved itself yet again as an alternative substrate: it quickly absorbs water and nutrients and dries evenly. What’s more, the larva of the Lyprauta mosquito (pot worm) has no chance of developing because of the structure of the substrate.

We based our trial design on three substrates. We opted for Fibre-Neth® substrate based on specially selected coco substrate, a loose mixture of coco and bark, and for reference we used traditional Phalaenopsis substrate based on bark and sphagnum. We grew more than 1,600 plants in total from two different cultivars: ‘Red Eye’ and ‘Sweet Talk’ by Floricultura.

After a relatively short cultivation period of 23 weeks, we evaluated the plants in order to demonstrate differences in growth, development and rooting between the different substrates. Accelerated growth was observed with the loose coco substrate and the Fibre-Neth® substrate. This shows that it is possible to achieve a comparable result in fewer cultivation weeks compared with the current bark substrates. Or growers have the option to produce heavier quality in the same number of weeks.

The Fibre-Neth® substrate had the best overall score. In the last counts, the number of plants developing three branches was particularly high (14.4%) compared with the other two substrates (6.2% in the loose substrate and only 1.4% in the reference substrate).

Van der Knaap’s coco substrates absorb water and nutrients quickly and dry evenly. One advantage of the Fibre-Neth® substrate is that each pot weighs the same. This equality in pot volume ensures even results in the greenhouse. In addition, the unique structure of the substrate makes it easier to introduce organic pest control. The population can develop properly in the pots and does not wash out easily.

Effect of substrate on shelf life

At the end of the trial, the Royal Flora Holland’s Postharvest Knowledge Centre examined the plants of the Sweet Talk variety to determine the effect of the cultivation substrate on consumer value. Several simulations were carried out in order to examine the response of the plants at different stages of cultivation, the transport, point of sale and consumer stages. The plants were assessed at the start of each stage, and once a week during the final stage. The ornamental value of the foliage and the number of good flowers were determined at the moment of assessment.

The Fibre-Neth® substrate had the best overall score for shelf life as well. This substrate yielded the highest number of open flowers and showed hardly any bud drop or bud drying during the eight weeks the trial lasted. These results are consistent with the 2019 shelf life trial. The substrate has a relatively high moisture retaining capacity, meaning that the plants can last longer without watering. This is perfect for the transport and retail phase.

Virtually simultaneously with the trial in ‘de Kas’, a second orchid trial was carried out in the World Horti Center in Naaldwijk, initiated by the Potorchidee crop cooperative. The aim was to jointly demonstrate that potworm development can be prevented with coco substrate, while achieving at least the same quality as with traditional substrate. Previous trials did not yield a reliable picture because watering and fertilisation cannot be controlled separately in practice. 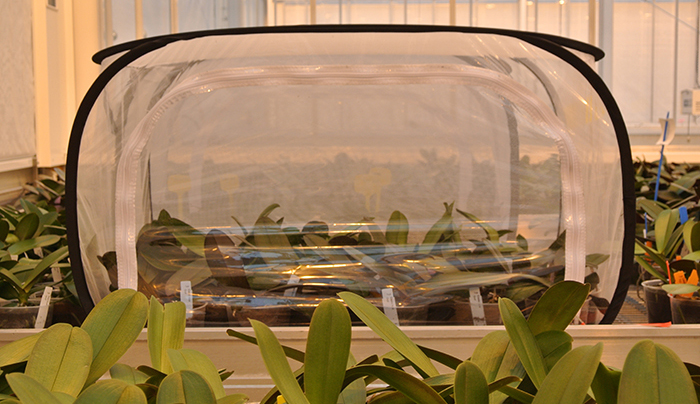 During this trial, Lyprauta mosquitoes were deliberately introduced in separate tents and not actively controlled. Afterwards, it appeared that the population had not developed in the Fibre-Neth® substrate. Thanks to the unique structure, the pot worm larva has no opportunity to develop and the damage remains manageable.