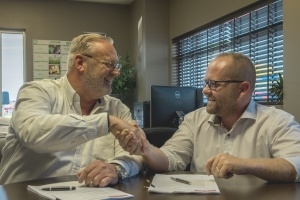 The cultivation system will be used to grow six hectares of peppers in 2018, which will rise to twelve hectares in the years to come. NatureFresh Farms has already been growing peppers organically for some time, but by using Van der Knaap's cultivation concept they aim to increase production and improve quality even more.

Breakthrough in sustainable organic cultivation
Van der Knaap's R&D team and its partners have set themselves a goal to develop a cultivation system that enables organic growing above soil. A team led by Karel de Bruijn, Van der Knaap's R&D Manager, has developed a reactor to convert proteins into nitrate (NO3) nitrogen. The nutrition solution produced with the reactor is free of organic residues, moulds and bacteria. A group of growers in the Netherlands has been cultivating products with this patented concept under HarvestHouse since 2016.