The perfect sensor for coco substrates

In the past year, large-scale tests were carried out with Growficient sensors in Van der Knaap Group’s innovation centre 'de Kas'. At the end of 2019, both parties expressed their intention to jointly investigate how the sensors can be optimally used in Van der Knaap's fine and coarse coco substrates. 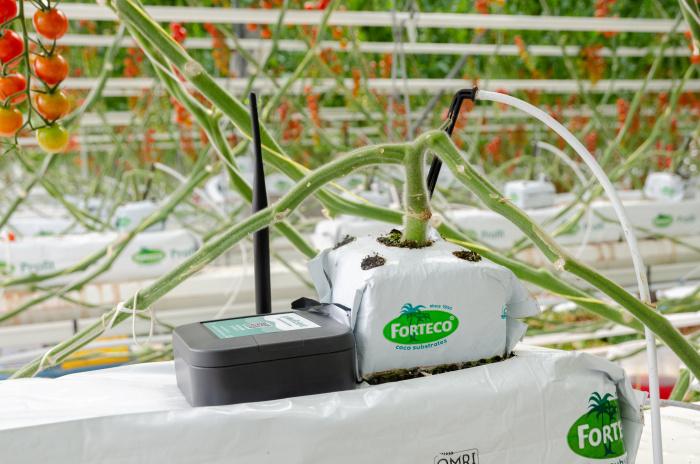 Testing in ‘de Kas’
The use of sensors in coco substrate was, in contrast to use in stone wool, not possible until now. Several tests with different brands of sensors in coco substrates have been carried out in innovation centre 'de Kas'. These turned out to be unreliable, not scalable or the data could not be processed properly. Particularly the coarse structure of coco, which contains a lot of air, caused the data to be insufficiently reliable on a regular basis.

The sensors made by Growficient were also extensively tested. These proved to be very reliable in their measurements, in both fine and coarse coco substrate. In the past year, the sensors were used in vegetable crops such as cucumber, pepper and tomato, as well as in soft fruit crops like strawberry. This concerned substrates that consisted entirely of coco material, but also mixtures of coco and peat. The weighing scale developed by Forteco was used as a reference for the data.

Growficient sensors
Growficient supplies a so-called ‘plug-and-play’ system that supports growers in monitoring and optimising their irrigation strategy. After placement, the sensors immediately start sending data. The data is sent from the wireless sensors to a receiver with a 4G connection. The sensors carry out a measurement every five minutes, whereby growers can determine the lower and upper values themselves. When the measured values exceed the set parameters, the alarm function is triggered. The sensors are able to measure not only the moisture content, but also the EC value, temperature in and even just above the substrate. All sensors in the greenhouse are linked in the system to provide a complete picture. The data is plotted in clear graphs. It is even possible to have a third look at the data, for instance a crop advisor.

By measuring properly, a clear picture is created of what is happening in the substrate, around the roots. With the data from the sensors, it is possible to optimise the watering and fertilisation strategy. This benefits the results: less loss and a higher quality of the crop. Several of Van der Knaap's customers are now using the system and gaining experience with it.

Follow-up tests in ‘de Kas’
In the coming period we will continue to carry out tests with the sensors in ‘de Kas’. Among other things, we will look at the height of a growbag in relation to the pin of the sensor, the position of the pin and its stability. In addition, we aim to link our climate computer with the Growficient platform, like a number of growers, in order to work towards autonomous irrigation together with Growficient.

More information
Would you like to know more about the use of Growficient's sensors in coco substrate? Please contact Wim van der Ende via telephone number +31 (0)174 296606 or e-mail to sales@vanderknaap.info. Or visit www.growficient.com.