Home > Latest news > News > The next step in emission-free cultivation

The next step in emission-free cultivation

After years of development, Van der Knaap Group is launching its sodium remover. ‘Natrex®‘ selectively extracts the sodium that is present in the drain water, allowing for the drain water to continue to be recycled without losing the crop protection products and other useful nutritional elements. The first system has now been installed at a grower in Canada for an area of more than 12 hectares. 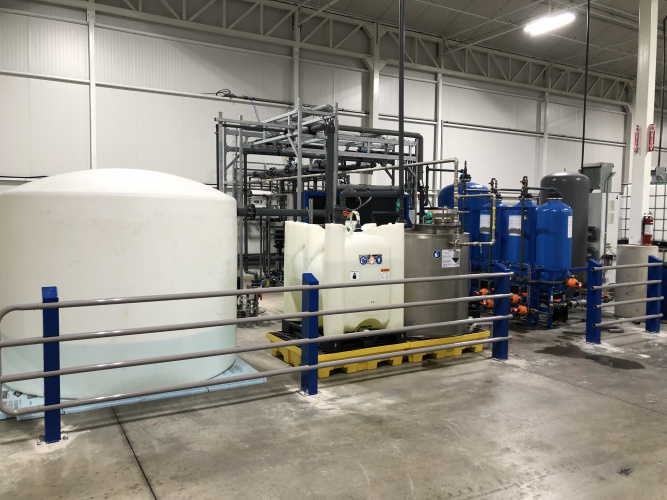 Residual water flows
Since 2018, purification of residual flows is mandatory in The Netherlands. At least 95% of the crop protective products must be removed from the discharge of wastewater. This was only one of the first steps towards emission-free cultivation. From 2027, the sector must comply with the ‘zero discharge’ goal. The rising sodium levels are the main reason for discharge.

Sodium (Na) is an element that is absorbed to a limited extent by most crops. As a result, the sodium concentration in the substrate and the drain water will rise to the point where recirculation is no longer recommended. Van der Knaap’s sodium remover ‘Natrex®’ selectively extracts the sodium that is present in the drain water, allowing for the drain water to continue to be recycled. The crop protection products and other useful nutritional elements do remain in the system.

How it works
The system is based on the separation of sodium from the valuable nutrients. This is achieved through a succession of techniques where different elements can be filtered and separated from each other. An acidic solution of sodium and chloride remains as waste stream. This is collected by Van der Knaap and then used in other industries to neutralise alkaline water flows. This process is completely circular; nothing goes to waste. The system is adapted to the situation of the grower, whereby the sodium peak remains below the damage threshold. This will differ per crop and can be determined in consultation with the grower.

Effect of sodium on cultivation
Some crops are more sensitive to sodium than others. Van der Knaap has been researching the effects of sodium on various crops for several years now. In 2021, research was carried out in collaboration with Wageningen University & Research into the negative effects of sodium on the production and quality of a sweet pepper crop. Cultivation was monitored for a year, during which half of the plants in the trials were given a high sodium content. The other half of the plants did not receive sodium at all. This trial showed that it is beneficial to keep the sodium content low.

Benefits of Natrex®
With Natrex® the grower can comply with regulations and also save on fertilisers, because other useful elements remain available in the system. In addition, research shows that the sodium content can also influence the growth and quality of the crop and the harvested product.