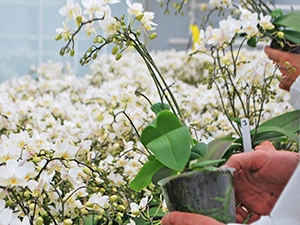 Dirk Zwinkels, who works in Research & Development at Van der Knaap, talked about the tests carried out by Van der Knaap Group in recent years in the 'De Kas' innovation centre. These include the tests with different substrates, which have been further developed over the years. The most recent tests mainly focus on propagating and cultivating Phalaenopsis in coco plugs, resulting in the plug-in-plug system.

Peter van Os, adviser at Van Os Research, spoke in detail about the problem of what's known in Dutch as 'potworm' (the larvae of the flies Lyprauta cambria, Proceroplatus trinidadensis and Lyprauta chacoensis). He explained the current methods used for repelling or controlling potworm, including dry cultivation, and chemical and organic options. Van Os also sees propagation in coco plugs and cultivation in finer (coconut) substrates as a possible solution: "a moist substrate, but rich in oxygen." The fine particles in these substrates might make it difficult for the potworm to penetrate the substrate. "This breaks the potworm's life cycle," Van Os said.

Senior Area Manager Dick Verweij (Van der Knaap Group) talked attendees through the developments that Van der Knaap has made over the past thirteen years in terms of substrates and plugs for propagating and cultivating Phalaenopsis.

Following the presentations, there was a lively discussion on the applications, developments, and future possibilities in the fields of labour-saving and accelerating cultivation.