Research was conducted in our innovation centre 'de Kas' into the applicability of organic calcium nitrate (Ca(NO3)2) in the organic cultivation of pointed peppers. During this trial, cultivation was carried out according to the usual organic cultivation method, in which compost served as the basic fertilisation. However, when the crop needed it, liquid organic fertiliser was added. The goal is a healthier, more resilient and manageable crop.

“With this organic fertiliser you can even out highs and lows in the amount of absorbable nitrogen. This results in a stronger, healthier crop that produces more and is less susceptible to diseases and pests.”
- Karel de Bruijn, director of Sustainable Growing Systems at Van der Knaap -

In Europe, organic cultivation takes place inseparably from the subsoil. For that reason, Van der Knaap's R&D team has brought together the best of both worlds in this trial: the mineralisation of organic nutrients and compost in the soil, supplemented with nitrogen mineralised by bacteria from the bioreactor (OWS). The research team is supported by organic cultivation consultant Wim van Marrewijk.

In accordance with traditional organic cultivation, a layer of compost was applied before planting to provide the basic nutrition. However, the test greenhouse had never been used for organic cultivation before. Consequently the soil still contained excess salts from previous cultivations in the beginning of the trial. There was also a louse infestation at the start of cultivation. This infestation has been completely brought under control with biological control agents.

During the trial, insight was gained into the availability of nutrients through plant sap analyses. The distribution of nutrients and sugars was mapped in both the young and the old leaves. In turn, these results were used as an indicator for optimal growth conditions.

Moisture sensors were used to monitor the soil moisture content at different depths. This data was an important tool in the irrigation strategy. With this data, the right amount of water with appropriate EC and amount of liquid fertilisers could be applied at the right time. This made the fertilisers available to the crop at the desired times.

“Despite the climatic limitations of the small test greenhouse and the fact that the soil was not yet fully adapted to the organic cultivation method, we have seen a clear positive contribution of the liquid fertiliser to the cultivation. The crop has produced a normal amount of fruit of very good quality and sorting.”
- Cultivation consultant Wim van Marrewijk –

The two varieties in this trial, Palermo and Cooper, performed similarly. The average harvest was 14.75 kg/m2 for Cooper and 15.09 kg/m2 for Palermo. It should be noted that some loss has occurred due to blossom end rot in the first weeks. This is reflected in the graph, where a lower fruit weight was realised in the first harvest weeks. The average fruit weight for Cooper was 114 grams and Palermo 105 grams. 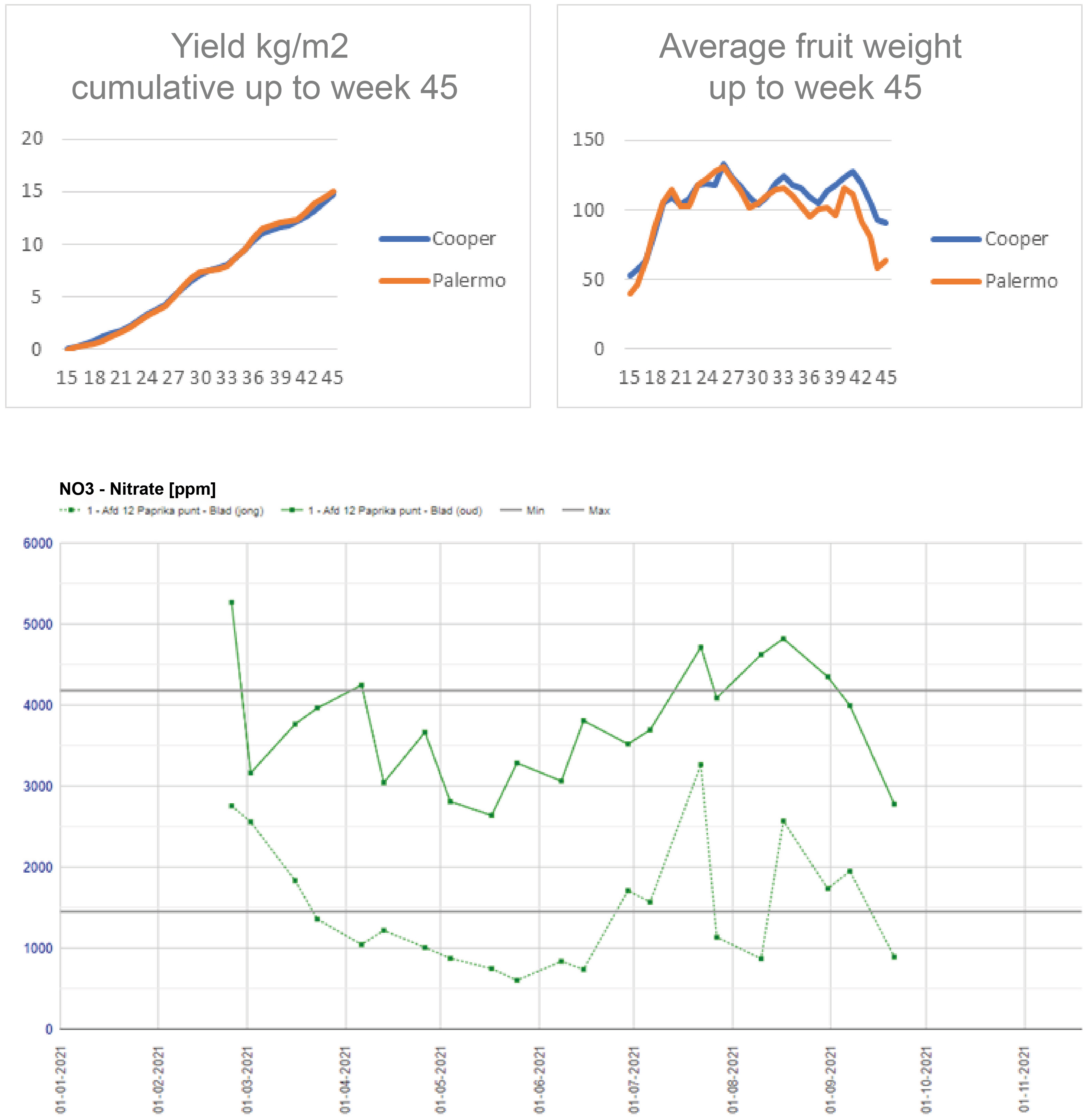 With the liquid organic fertiliser, Van der Knaap provides the growers with a perfect control tool to even out the highs and lows in nitrogen release from the soil. In organic soil cultivation, the nutrients from the compost are normally released by the soil life. The grower has little influence on this process. By applying Van der Knaap's liquid calcium nitrate at the moments when the crop needs it, the crop becomes more vital and less susceptible to diseases and pests.

During this research, a normal yield was achieved with fruits of very good quality and sorting. The follow-up trial will start at the end of January 2022, and it is expected that, without the limitations of the first trial year, production can be increased. The objective is >20 kg/m2.