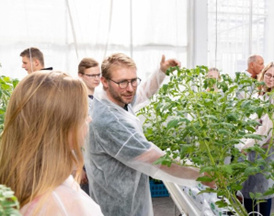 Students from Lentiz assessed and cared for the crops under the supervision of Horti-tech, and collected data during the entire cultivation period. Students from Inholland University of Applied Sciences have collaborated with Koppert to devise and successfully implement a crop protection plan. Fourth year students have conducted research into the nutritional value of tomatoes grown in a circular horticulture system. Cultivation was completed at the end of June 2022, resulting in a robust crop, efficient production and healthy, sustainable tomatoes.

Background
Organic fertilisers are an essential input for modern greenhouse horticulture. In the Netherlands, we are currently dealing with an excess nitrogen problem from fertiliser use, this despite the high demand for nitrogen in greenhouse horticulture. In modern greenhouse horticulture, tailor-made nutritional solutions are offered for plants on substrate. Manure from the farm can’t be added directly to this process. Substrate supplier Van der Knaap Group has developed a bioreactor able to convert animal manure and organic waste streams into fertilisers for use in substrate cultivation. The nutrients were fixed, both in minerals and in organic compounds. The plant and active soil life found in substrate ensure that the plant can successfully extract the nutrients it requires.

The fertilisers produced in this bioreactor are now in commercial use, in organic cultivation on coco substrate in Canada and the USA. These companies have installed a reactor on their premises, and, as a result, can produce organically for the North American market.

Students from the Horti Technics & Management programme at Lentiz have seen, experienced and learned the essentials, innovations and possibilities of circular cultivation. Inholland University of Applied Sciences has focused on the differences in nutritional values between conventionally grown and circular grown tomatoes.

Vitamins and carotenoids were analysed at three different moments during the research. The tomatoes from the circular greenhouse were compared with produce from a professional grower, with a similar planting date and of the same variety. Research focused specifically on three elements, two vitamins and carotenoids.

Carotenoids
Carotenoids like lycopene are important natural pigments found in plants, photosynthetic bacteria, fungi and algae. They are responsible for the bright colours of fruit and vegetables, and for protecting photosynthetic organisms against excessive light damage. Lycopene forms roughly 80-90% of the total carotenoid content of red ripe tomatoes.

Production
The crop is grown using only organic crop protection products and is described as a resilient variety. Cultivation using coco coir mats and organic fertilisers produced from a bioreactor, has been very successful. The crop has had an excellent development. A section of the greenhouse of approximately 100 m² used for the trial is difficult to compare with a full size greenhouse, but one conclusion that can be made is that, for the duration of the autumn, winter and spring, a productive and steerable crop was grown. We estimated production at about 80 kg/m² per year. We ended cultivation before the summer break, normally lit cultivation continues for a few weeks longer. This resulted in a lower yield than that attained in practice, where a result of about 93 kg/m² was achieved using the Xandor variety. Considering the cultivational circumstances, such as the effect of shadows in the greenhouse, the research group is extremely satisfied with this result.

> Meet us at IPM and more

> The next step in emission-free cultivation